Journey’s Escape: Looking Back After 39 Years 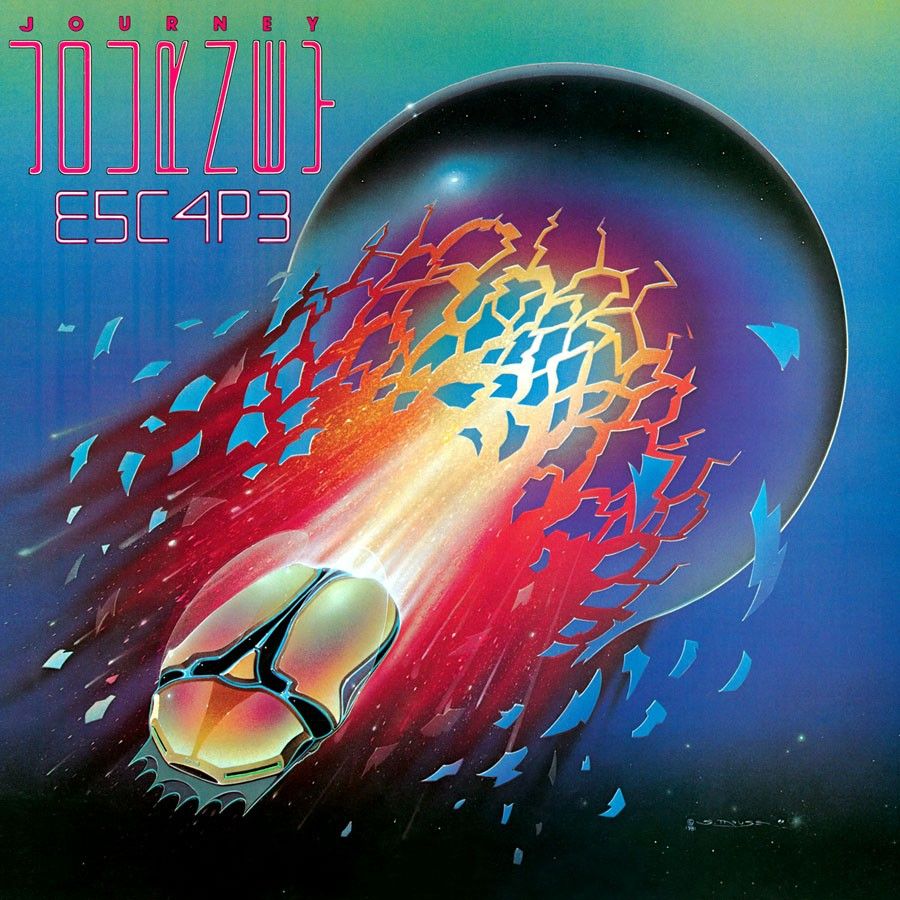 A few days ago I saw that Neal Schon, the lead guitarist of rock band Journey, had posted on his Facebook page saying that it has now been 39 years since the release of Journey’s hit album, Escape.

Whoa, 39 years! I knew I had to make a blog post celebrating this milestone, and also talking about this incredible and iconic album from one of my favourite bands.

If you don’t know who Journey is, well you must have been living under a rock! Journey originated in San Francisco in the 1970s, made up of musicians from Santana and other popular bands. Initially having little success, a change in lead singer in 1977, from Gregg Rolie to Steve Perry, shot the band to stardom. Although they did have success, their peak in fame came with Escape.

Escape was released on July 17, 1981, and it was the first album with new keyboardist Jonathan Cain. Cain was previously with band The Babys, but made his way to Journey in 1980. It’s lucky that Journey snapped him up, as he became one of the main songwriters in the band and thus helped write some of the band’s most iconic songs including “Don’t Stop Believin” and “Faithfully”. The album also became Journey’s most successful studio album ever, topping the Billboard 200 chart and becoming certified platinum 9 times. It was so successful, in fact, that it even spawned a VIDEO GAME, called Journey Escape for arcade machines and the Atari 2600 gaming console.

Even if you’ve never really heard of Escape the album, I’m sure you’ve heard of and love the songs from the album. The iconic “Don’t Stop Believin”, the ballad “Open Arms”, and other classics like “Who’s Crying Now” and “Stone in Love”. The album has that classic 1980s rock ballad sound, with Steve Perry’s incredible vocals, Neal Schon’s shredding guitar solos, and the introduction of Jonathan Cain’s lovely piano riffs. There is a perfect mixture of heavier songs like “Stone in Love” and “Mother, Father”, which are reminiscent of the band’s previous music, with soft-rock ballads like “Open Arms” and ‘Who’s Crying Now”.

I truly love this album, with its 1980s rock sound and incredible musicianship from the best line-up of the band (in my opinion). As I do with all my album dissections and reviews, here are my favourite five songs from Escape, in no particular order.

Journey’s most famous song, I couldn’t leave it off this post. This song also has a special place in my heart, as it is the song that got me into Journey in the first place. I remember going to the cinema as a kid to see Bedtime Stories, an Adam Sandler movie, and hearing the song for the first time during the end credits. I turned to my parents and said “What’s this song?”. They then introduced me to Journey! This song is perfection, with the classic  piano and bass line, the iconic final chorus, it’s just so good! Lyrically, the song was inspired by Jonathan Cain’s dad repeatedly saying to his son, “Don’t stop believing or you’re done, dude” to encourage him to keep pursuing music. It’s safe to say that Journey might have been forgotten if this song hadn’t made a resurgence in recent years due to The Sopranos, Glee, and other popular films and TV shows. Take a listen though to the original Journey version, live in Houston. The best version of a truly iconic and fantastic song.

A lesser known song but a classic nonetheless. One of the more heavy songs on the album, “Mother, Father” tells the story of a broken family, possibly a divorced family, and the effect it has on all parties. The son makes it known that he is trying to help, (“Don’t you know that I’m alive for you/I’m your seventh son”) and tells the family to “have faith, believe”. Musically, this song really shows of Steve Perry’s incredible voice. He soars over the notes, almost screaming some of the lines in the later verses. It is quite rocky, building up angrily to chorus before the sweet and positive melody of the chorus kicks in. I love the contrast of the sadness of the parents and the positivity of the son in the chorus. This is a great song, and hearing it live is next level! Check it out:

The title track is a fun song about freedom and growing up. It’s almost the “Born to Run” of Journey, lyrically anyway. Here, Perry sings about a young boy who is fed up with his everyday life, and decides he is going to “break away” and leave. For me, I like this song as the melody is so damn catchy! Every time I listen to this song I am singing “I’ve got dreams I’m living for” for the next few days as it is stuck in my head! Also, musically I think it perfectly captures the freedom that the boy in the song is feeling. A great song that captures growing up and moving away, while also being musically excellent.

The classic love song. Can you believe that this almost wasn’t on the album because many of the band members didn’t like the ballad style? Crazy to think about now, but it’s true. “Open Arms” is a beautiful song with lovely melodies and touching lyrics. Perry’s voice is really shown off here, as he softly yet powerfully sings the sweet melody. This is Journey’s first foray into romantic power ballads, and it’s probably my favourite one (“Faithfully” and “When You Love a Woman” come very close though). Perry sings about wanting to be with his loved one always and how happy he is to have her back. The mixture of Perry’s soaring vocals, the luscious piano part and the soft backing of guitar, bass and drums is just perfect and it works so well. A perfect wedding song 🙂

A song about raw and powerful love, and escaping the mundane 9-5 workday. This song has similar themes to “Escape”, however in “Keep On Runnin”, the protagonist is singing about running away and being with his girl rather than just by himself. This is a very rocky song, with driving guitar and powerful vocals from Steve Perry. Honestly he sings so powerfully that I didn’t know most of the words to this song because of how raw the vocals are. Musically, this is definitely a return to Journey’s older sound, which was more driving and heavy rock rather than a lot of the power ballads on Escape. Definitely worth a listen, it’s a great song to listen to whilst driving!

So that was my retrospective of Journey’s 1981 album Escape. As you can see, it’s not all about “Don’t Stop Believin”, there are so many great Journey songs that don’t get the recognition they deserve. So go and listen to the Escape album, and some of Journey’s other albums as well. I’m sure you’ll enjoy listening to them.

And happy 39th birthday Escape. Thank you to Neal Schon, Steve Perry, Jonathan Cain, Ross Valory and Steve Smith for giving us such an incredible and iconic album.