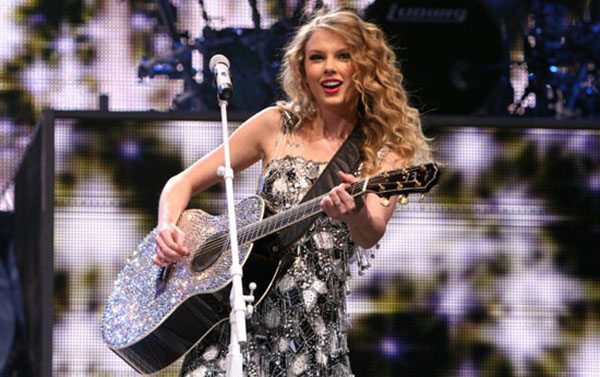 If you read my review of Taylor Swift’s album Fearless, then you know that this album was my childhood (read the review here!). I adored this album and listened to it on repeat for years! I remember hearing that she was touring and coming to my city, but unfortunately I found out I think the day before the show and so I never got to see the Fearless Tour. Until now.

Luckily, due to the success of the tour and of the album, Journey to Fearless, a three-part documentary event was aired starting from October 22, 2010 over three nights. This show was the concert video for the tour, but it also featured interviews and behind the scenes footage. When I found out about this I was very excited that I would be able to relive the tour that I never got to go too, so I decided to watch the film a few nights ago. Today, I’m going to talk about this concert video and tell you if it’s any good.

First of all, a disclaimer. This is not REALLY a concert video. The main part of the show is interviews and talking, and sometimes this happens during performances, whilst Swift is singing and performing. This was really frustrating to me. I’m happy to watch the interviews in between the songs, but during? Really? The interviews themselves were good, with Swift, her mother Andrea, her best friend Abigail and members of her band being interviewed. These segments mostly talk about how she became famous, her childhood, and also the behind the scenes of the tour. These are fine, but I would have rathered a separate documentary with all this footage and then the tour performance by itself. But it’s okay.

The other thing that bothered me was that the songs are not presented in the order they were in the actual show. I can’t understand why the decision was made to do this, but it was kind of disorientating for me knowing that a certain song was supposed to be next and then it was a completely different song. This wouldn’t have bothered me as much if this wasn’t advertised as a true representation of the tour. If its advertised as a tour video, I expect it to be in the order of the actual show.

Other than that, I enjoyed watching this tour video. The scale of the performance really shocked me. Swift used a large stage that could have different images projected on it. As such, each song had a specific background and setting, becoming even more theatrical with the use of six dancers or actors. There was also lots of costume changes, with Swift changing into different types of dresses, some mini, some longer, and even some gowns. These were done extremely smoothly and add to the theatrical nature of the show.

The special effects are great too, most spectacularly in the final song “Should’ve Said No”, where in the final chorus, rain falls down from the ceiling and onto Swift, who dramatically sings the final chorus whilst being drenched. I can’t even imagine what that must have been like live.

During the concert Swift sang a variety of songs from her albums Taylor Swift and of course, Fearless. The set list was great although not all the songs were included and as I mentioned the songs were out of order. I thought that Swift sounded great, especially considering she was only 19 or 20 when this performance was filmed. I went in with an expectation that she wouldn’t sound very good, purely because that is what I had heard from people who went to the concert. But I was pleasantly surprised as she sounded great, sometimes as good as the original recording. Her band were also the stars of the show, with Caitlin the violinist, and Grant and Paul on the guitars absolutely killing it on their instruments. I love how much Swift interacts with them here, you can see how close they all are and it adds to the charm of the show.

One thing I noticed was how much Swift and her concerts have changed. In this show, I saw a young girl who adored her fans and always in the crowd and interacting with them. During “Tim McGraw”, Swift walks through the crowd, hugging, kissing and talking to all of her fans. She does this again during “Hey Stephen”, where she pops up on the other side of the arena and then walks through the crowd back to the B stage. She just seems so genuine and authentic here. I feel like if Swift would have made a mistake it would have been fine and she and the crowd would have just laughed it off. Now I feel like she wouldn’t have made a mistake at all, making it less authentic (in my opinion). Musicians making mistakes are great, you relate to them more and it also proves that they are doing everything live.

I also loved her energy and how into the songs she was getting. Swift does her classic hair flip, interacts with her band and dances around crazily. I love this, it shows how much she loves her music and performing. I couldn’t help but feel sad when watching as I realised that Swift today would never do this. Her concerts are extremely polished, pop performances with sleek dance moves and little to no band interaction (especially in the clips I’ve seen of the 1989 World Tour). While I know she is no longer 19 I do wish she was a little bit more free in her recent performances. It’s what makes her seem genuine and makes me enjoy myself even more.

You also see in the behind the scenes footage that she used to vlog her experiences and really interact with her fans online. I understand why she doesn’t do it now but it’s still sad that Swift is more private and more distant with her fans (particularly during the current folklore era).

I laughed when I saw people filming the show in the audience with their digital cameras and cringed big time when Justin Bieber popped up for a second. It’s aspects like these that make this concert video feel dated, however looking at the actual performance it is definitely still awesome and feels relevant.

Watching this show made me very sad I never saw it live, as it was incredible to watch and I loved every minute of the actual concert. I’d glad though I got to partly live my childhood dreams through this video.

If you’re a Swift fan, I think it’s definitely worth watching and checking out. I’m sure you’ll have fun singing along to all the songs and learning more about Swift’s musical journey. It’s also just fun to see what she was like back then compared to now. Anyway, I had fun watching this concert, it brought me joy on my Friday night.